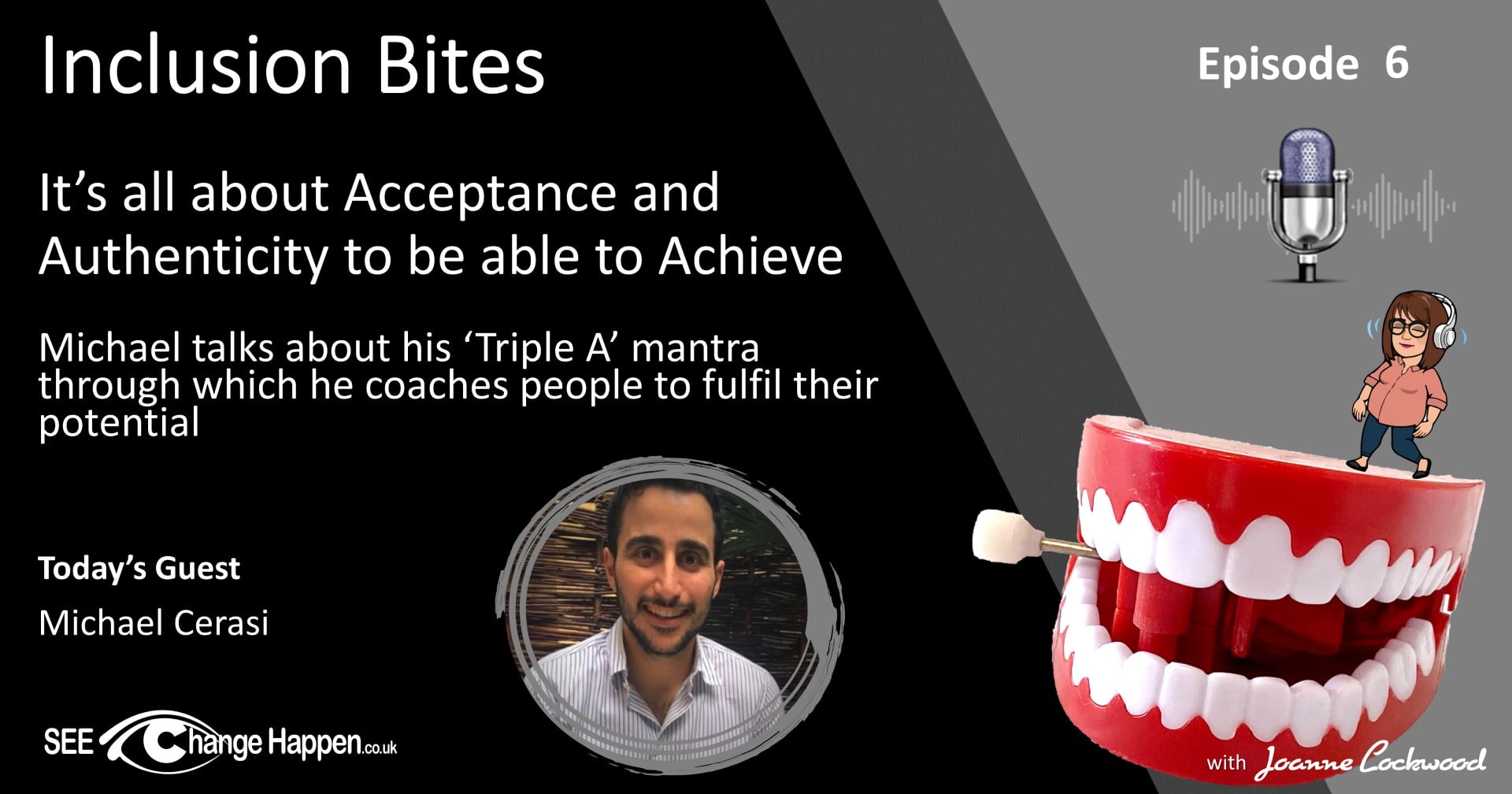 Michael describes himself as a Transformational Life Coach who's super power is being an active listener that is full of compassion. Through his coaching he helps people find a way to achieve what has been holding them back. During his journey he has also had to face his own challenges of coming out as Bisexual and confronting misunderstandings from many. Michael talks in this episode about the work he did managing stages at Bi Pride in London in 2019 and the value he gives back to the LGBTQ+ community through his coaching and support as The Rainbow Coach. Please join in the conversation and leave your comments below.

Joanne sat down to talk to Michael Cerasi who describes himself as a Transformational Life Coach to discuss ‘It’s all about Acceptance and Authenticity to be able to Achieve’.

Michael’s philosophy is Triple A, an easy abbreviation to remember where he hopes to super charge people’s journey into success and achieving. He believes it is important to know your own value in order to navigate success and know which direction to go in. Michael lists one of his superpowers as being an active listener – where someone is able to talk through the issue with him and come to their own decision, something that people often believe they are doing, when they are actually giving advice. To be an active listener you need to dedicate time to the conversation and switch off all distractions, reflecting back is also important to make sure you have understood what was said.

As a coach Michael works with clients for up to 6 sessions, allowing them to go deep into the challenge they may be facing. This can depend on how vulnerable the client is able to be from the beginning. People tend to go to Michael when they are stuck, and don’t know what their next step should be. Counselling is helping to cure past trauma, whereas coaching looks at what is going on for you now and how that is affecting your future, it is non advisory. You need to be careful how you frame the questions in coaching as you do not want to be giving subconscious advise. A coaching session allows people time to invest in themselves and can often be cathartic.

During this pandemic there has been a lot of push and pull with conflicting priorities, so Michael has his clients concentrate on achieving a better balance. Each conversation he has with a client is unique with the goal being to empower people, so that any limiting beliefs or stumbling blocks that may be stopping them reaching where they want to be can be navigated around.

There is still a lot of stigma around bisexuality, especially being bisexual as a male. Awareness needs to be raised around sexual orientation and not judging each other. Michael calls himself the Rainbow coach, where your journey is to find the ‘pot of gold’ at the end. The rainbow flag is meant to be all encompassing, bringing people together – so many ways that people identify with their own gender and it is their own conscious choice to live authentically. Authenticity is having the power to be your true self, and this is something you need to find for yourself. It is about embracing our whole self, something that often takes work.