Understanding the conflict between Culture vs Humanity 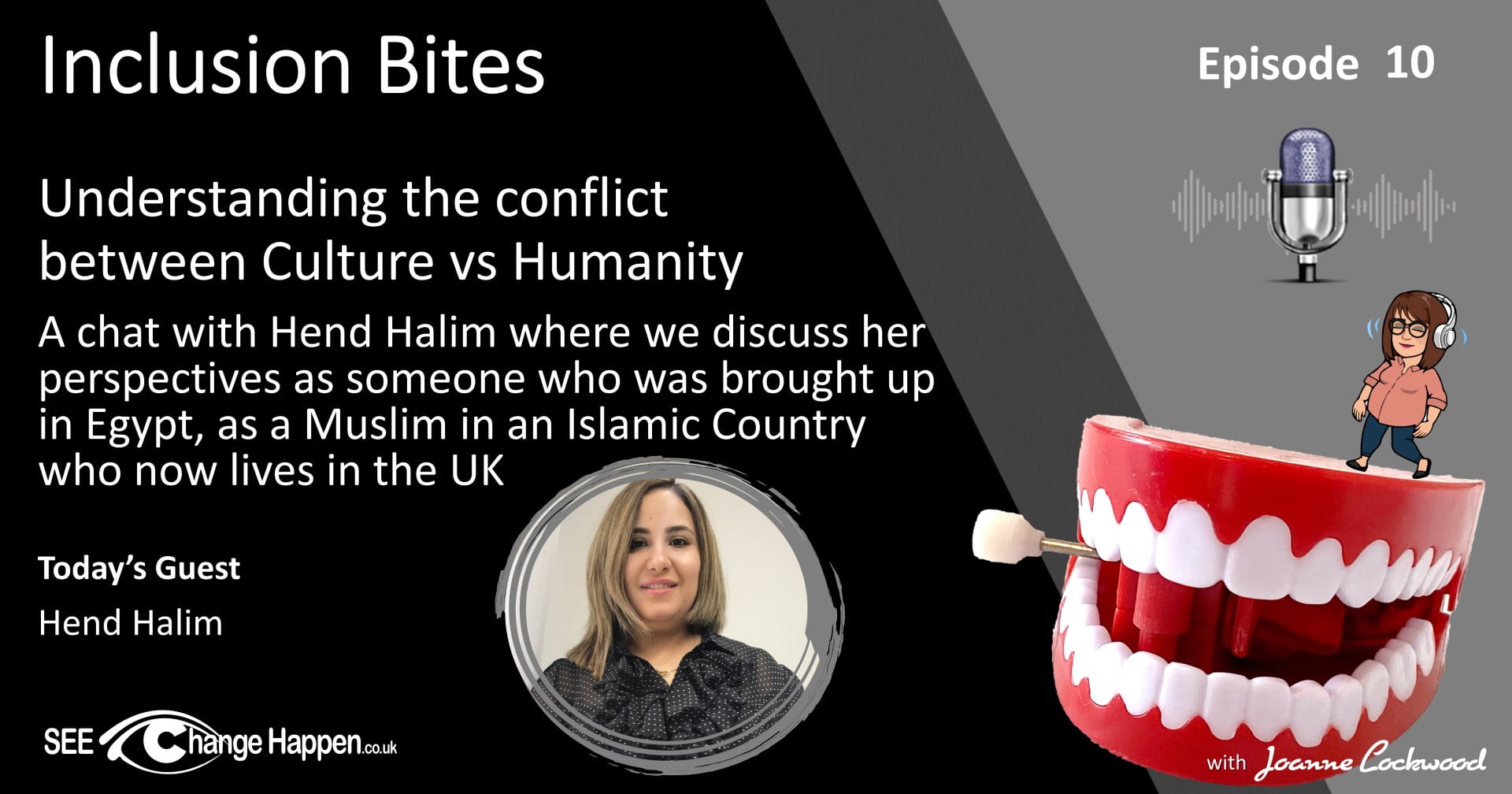 Understanding the conflict between Culture vs Humanity

Joanne has a chat with Hend where we discuss her perspectives as someone who was brought up in Egypt, as a Muslim in an Islamic Country who now lives in the UK

In this episode Joanne talks to Hend Halim, a Muslim woman who was born in Egypt and now lives in the UK with her husband and young child. Hend talks about how she was raised in a society that was intolerant of LGBTQ+ identities and how she found the UK and Western Culture around inclusion alien to her at first. She talks about how she has invested her own time to learn and embrace an open culture where there is freedom of expression. Hend also talks about her surprise at the levels of intolerance in the UK culture when it comes to LGBTQ+ and Trans people in the UK and is herself a passionate ally and dedicating her career in the D&I arena.

Joanne sits down with Hend Malin, a Muslim woman born in Egypt and now living in the UK to discuss ‘Understanding the conflict between Culture vs Humanity’.

Hend thinks in order to truly understand the conflict between culture and humanity, you need to start by liberating yourself and that it is only by interacting with different groups of people that you are able to find your own truth. She has found as a Muslim woman she constantly has to fight against discrimination and stereotypes.

Hend first realised the huge cultural impact her childhood had on her perceptions when she started her studies on Human Rights where one of the modules was on LGBT and Islam, a taboo subject at that time. She had been raised to believe this was not right and it was this first eye opening experience that showed her the prejudices she held against groups she actually didn’t know anything about, something that had been ingrained in her since birth. We all have in-built stereotypes passed on to us through our culture. A survey conducted in Egypt in 2017 showed that 95% of people agreed that homosexuality should not be accepted.

Hend explains that an Arabic word can have up to 18 meanings, so it open to the scholar to manipulate that into the message they want to deliver. Arabic scripture was interpreted over 1400 years ago and Hend believes it now needs to be reinterpreted through a modern lens. From travelling and living in both Egypt and the UK she notes that although the western culture is more openly accepting of people’s differences that does not mean that everyone is on the same page.

Hend thinks within workplaces doing a ‘speed dating’ approach would help to challenge inbuilt stereotypes by allowing people to break the ice and get to know each other. She wants to work on giving a voice to those that are under-represented.  She believes that although she is not represented within the BLM movement that if it works for one underrepresented group, then everyone will one day have their turn. Joanne feels that we also need to have a better understanding of our own history and looking at how white culture has impacted black culture. There is no magic wand, but it is about talking to people, learning from each other and working on our acceptance and understanding of one another.

Why Love, Respect, Connection and Acceptance Matter
Why we need a more open dialogue on race