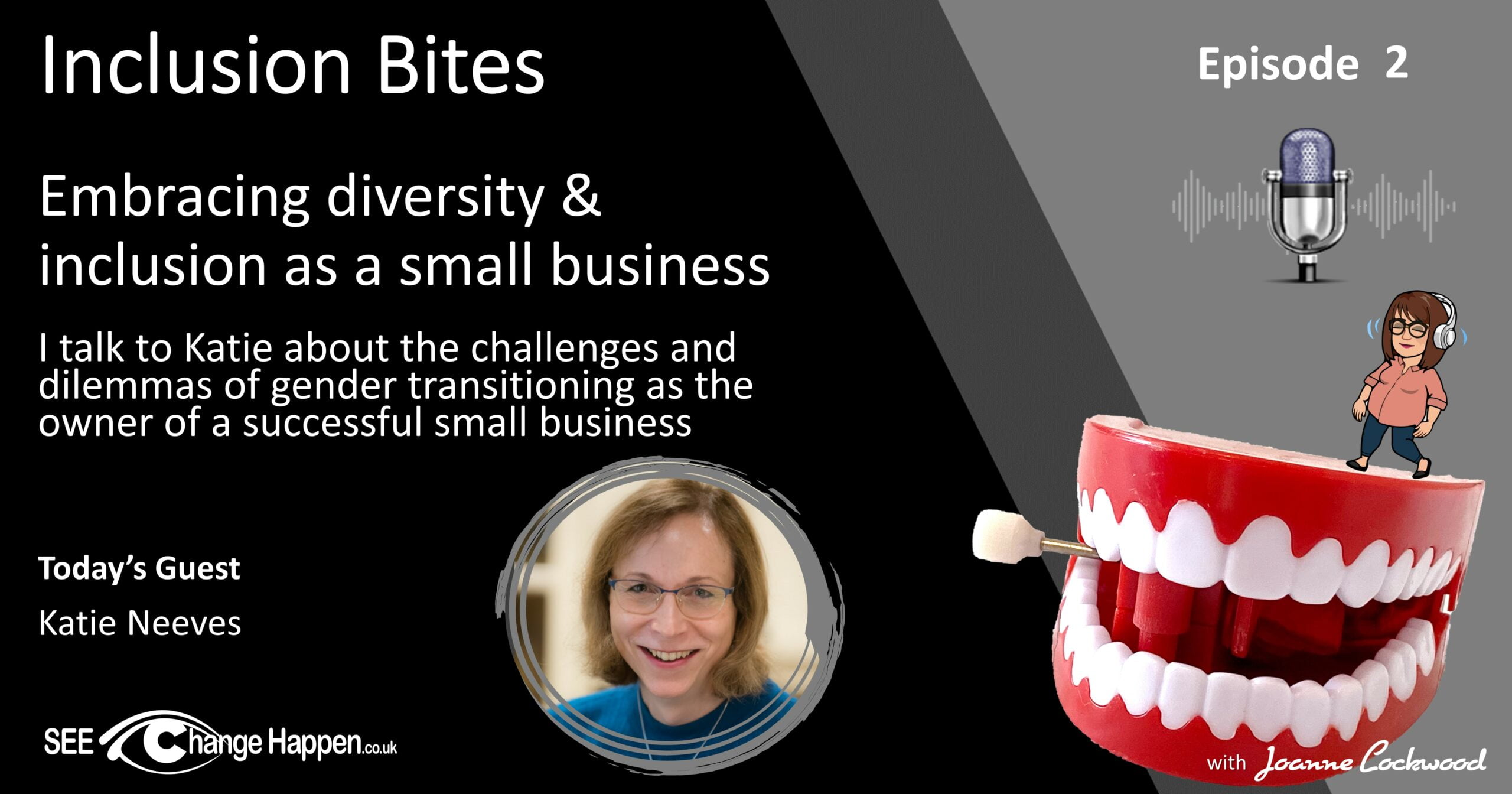 Katie talks about the lead up to her transition and her nervousness. This was not only a personal risk for her, but also for that of her photography business, a business that she had established and grown in her male persona for over 20 years. Anxious about how her customers would react she nervously "press send" on an announcement. She goes on to talk about the challenges she has had since and also how she has expanded as a Transgender Ambassador helping business become more trans inclusive. Please join in the conversation and leave your comments below.

Joanne sat down to talk to Katie Neeves of Cool2b Trans and discuss ‘Embracing diversity & inclusion as a small business owner’.

Katie lived for 48 years as a man, before coming out as a transgender 2 years ago and now along with her photography business, works as a trans ambassador. She feels that a lot of trans people do not know that it is OK to be trans and wants to lead by example, showing how much happier she is since transitioning. She came out publicly, making a ‘coming out’ video to all her clients and while incredibly nervous about doing so, she had an outpouring of support. It had taken her a long time to admit to herself that she was trans, but once she had she wanted to live as a female full time and come out as soon as possible.

As a small business owner, she was nervous about coming out as she had no protection and did lose several clients, however she has also faced positive discrimination.  She felt vulnerable working at weddings, due to wide range of guests in attendance and now only works at ones where she has received a recommendation. Initially she had a lot of anxiety about people’s reactions, of what they might say – especially when out at work. Now her confidence has grown she no longer worries and believes that what you project comes back at you, when you are nervous it shows in your body language etc.

Katie has a limiting belief with her voice being her give away, but she believes her journey is about authenticity, so not putting on an act for anybody. She does know that if she put more effort into how she is speaking, tone etc it would make life easier, in certain circumstances. Katie had voice coaching initially and wants to gradually raise vocals, rather than doing it too quickly.  Once people are aware she is trans then it takes the pressure off worrying about her voice. It is with people she does not know, or where she would have short conversations that she tends to make more effort to speak with higher octaves. Part of stopping working at weddings was around feeling uncomfortable trying to get people’s attention, having to shout out names to take group shots and the unknown of reactions she would receive.

Katie believes the best way she has found to approach people since transitioning, is by smiling. It breaks down barriers and shows confidence and puts others at ease. Trans activists are often quite angry, which can turn people off from the cause. Instead, try to help anyone that is struggling to accept the ‘new you’, you are not someone to be afraid of, or pitied and that you are now happy as you are living your truth. Katie and Joanne both accept that they are very lucky with the responses they have received when coming out as trans. This will not be the experience for everyone and often it is the pressure they put on themselves, with fear of what everyone’s reaction will be.

Some sections of generations tend to struggle with transgender more than others. Younger generations are generally more accepting. Older generations tend to find it harder to accept, but this can be a culture issue as they grew up in a very different time, when even being gay was considered a scandal, and trans issues were never discussed. Is impossible to generalise, however. Religion also plays a part, but this can sometimes be used to hide the fact that they may be bigots.

A takeaway that Katie would like people to have from this podcast is to be aware of those who are different, whether that be trans, race etc. Try and be conscious of anxieties and making their lives easier. You may already have someone that is trans within your company, but not felt comfortable enough to come out. It is the unknown and unpredictability that can cause anxiety; for some this may be wearing a dress to work for the first time or using the female/male toilets. It may be that you have not got an inclusive atmosphere within the workforce, so you would be making this that bit harder for them. If you can try to foster inclusivity through training and communication then it would ensure that everyone can bring their true selves to work, without any fear of retribution.