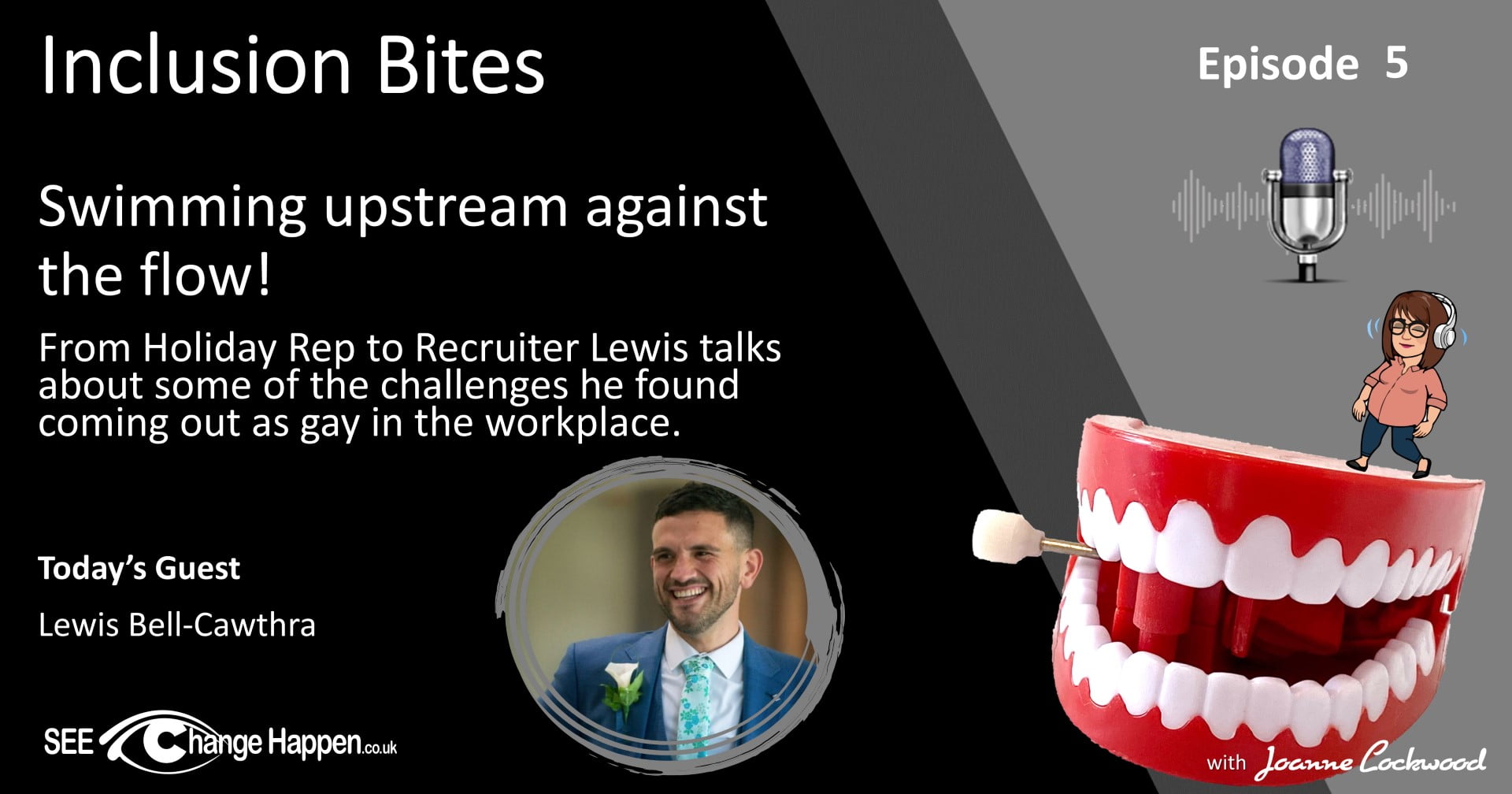 From Holiday Rep to Recruiter Lewis talks about some of the challenges he found coming out as gay in the workplace and how he found his place to thrive.

Lewis started his career as a holiday rep, but soon he was back in the UK for a "proper job" and found himself working for a company that bullied and discriminated against him, because he was gay. Lewis moved on to a new organisation where he has been embraced by the company and now helps to organise his local Pride and has even started up an LGBTQ+ football team. Listen to Lewis as he describes these experiences as a person who isn't just going to go with the flow. Please join in the conversation and leave your comments below.

Joanne sat down to talk to Lewis Bell-Cawthra to discuss the topic ‘Swimming upstream against the flow!’

It was when Lewis first started working in recruitment that he realised he was swimming against the flow. Prior to this he had worked in the travel industry, which has a very inclusive culture. He had worked as a holiday rep, a role known for its escapism- perfect for him at the time. He chose this career despite expectations because he felt people’s background didn’t matter, you could just be yourself. It was when he moved into the corporate world, he realised how differently he was treated because he was gay – with one manager questioning why he did not disclose this at the interview stage. Lewis points out that for many people the prejudices faced may have driven them away from this sector, in favour of a more inclusive one, but he felt he needed to prove to himself and others how strong he was by staying. He wanted to use his platform to try and educate and open the discussion around inclusion and diversity and as part of this he became a trustee for Exeter Pride and developed this to visiting schools to continue raising awareness.

Lewis still feels that every time he goes into a new environment he has to come out all over again. He tries to overcome any awkward questions by being as upfront as possible, stemming from a sense that he has to disclose this information, rather than necessarily wanting to.  Within his work he is trying to break down the gender stereotypes associated with roles and the feeling certain groups of people have that an industry may not be for them. There are not many openly gay recruiters, so Lewis feels this allows a level of trust with candidates who feel they can bring their whole identities and be themselves with him. He wants to build a diverse pool of candidates for each role, so he tends to post multiple adverts for each role with different wording/benefits which will appeal to different categories. He also de-genders CVs, especially for companies that tend to have a gender bias. He does feel that people are receptive to looking at candidates from all backgrounds, but there are still companies where their biases and culture are so entrenched, they struggle to move past these. This tends to be less of an issue with new/start-up businesses.

Lewis still thinks we have a long way to go in terms of acceptance. Although he believes it is improving, especially since gay marriage is legal as this was something that really affected him when he was younger. It is people’s perceptions that need to change. He wants to continue to use his platform as a tool to educate – even if it is something really simple, such as him using his pronouns on a signature a really small gesture but that means a lot to others. Lewis says that if you feel like you are in a company that doesn’t appreciate you, then do not be afraid to walk away and find a company that will value you for who you are. You should be able to work in a company where you feel supported.