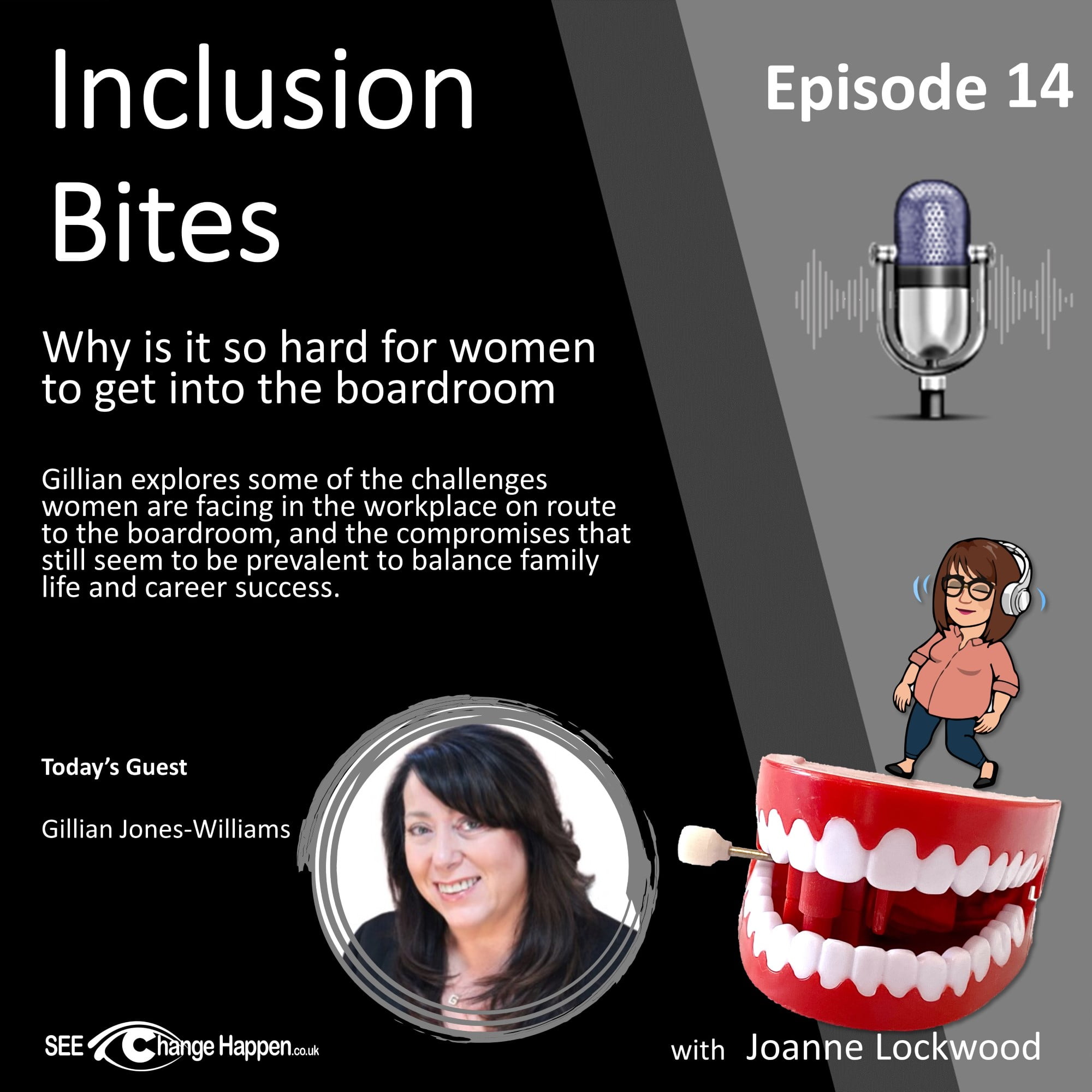 Gillian explores some of the challenges women are facing in the workplace on route to the boardroom, and the compromises that still seem to be prevalent to balance family life and career success.

Many women face challenges when trying to progress their career, often organisation don't put enough support in place to help women plan their careers. Gillian talks about some of the factors that can often hinder women, some of them structural and some that are down to their own life choices and desires. We talk on the topics of Debiased Recruitment practices and the whole topic of Meritocracy in hiring and progression that often discriminates against those with less typical characteristics. Gillian also talks about her lockdown project of writing and publishing a book that was her daily journal from the past 6 months, including some topic observations and ironies from this COVID-19 shared experience we've all endured.

Joanne sat down to talk to Gillian Jones-William of Emerge Development Consultancy about ‘Why is it so hard for women to get into the boardroom?’

Figures published by Deloitte showed that globally, women make up only 16.1% of boards; a 1.9% increase since 2017 highlighting that if we carry on the same trajectory it might be another 30 years till we see gender parity in the boardroom. Statistics show that many companies are aiming for 25-30% of their boards to be women, but surely this should be 50%?

Gillian believes a lot of prejudice and bias still exists for women in the workplace with concerns over whether they are able to fully submerge themselves into their roles, especially if they have a family. But Gillian believes for women it comes down to two things; the feeling of imposter syndrome and how well organisations set up a career path and prepare them for the progression from Senior Executive to Board member. There is still the perception that women are not ready to be on the board until they reach their 40’s, that it is only at this age that they will feel ready to stand up against their male counterparts and this is now coinciding with when many woman are taking time out to concentrate on starting a family. There is then the concern when they return as to whether they are ready to take on a senior level role. There are lots of views of when is the right time/right age – but these are all based on our biases.

The makeup of a board often sets the tone for the organisation. Both Joanne and Gillian agree it must be very daunting to be the first woman to join a board – you would need to be quite resilient and have the gravitas to get your voice heard. Gender bias will also play a part; with your stature, tone of voice etc. all affecting how you are viewed. People still want to see an ‘alpha’ on the board. Women almost need to work harder than their counterparts to stand out, with judgement still being made on gravitas rather than skill. There is also the beauty bias paradox – women already stand out by virtue of being  a women, but if they try to behave femininely they will be accused of trying to use their charm, but if they try to be more masculine they can be accused of being aggressive.  Men are only judged on their ability and never on their looks.

Another factor effecting women at a time when they are looking to advance in their careers is the menopause. Gillian believes that now the taboo has been lifted on this subject we need to be open and speak about it. The side effects associated with the menopause can impact women’s confidence and whether they would feel comfortable in the boardroom. It is often associated with a loss of identity and is tied into ageism – are you then considered someone who would be passed over for a younger candidate.

Since COVID19 there has been a rise in redundancies, so we now have a mix of generations competing for the same job and employees have a wider choice of candidates – ranging from students to those nearing retirement. In this environment, although the hope would be that the role would go to whoever was best placed, this is not always the case. Now that lockdown has eased many of the restrictions that historically may have hindered females being promoted have been removed, such as flexibility to work from home etc, so Gillian hopes that this will be a catalyst for change and a way to level the playing field. It does however bring other challenges as women now need to work on their virtual visibility and make themselves stand out – something that may be much harder when you are not physically in the room.

Women still face a lot of societal stigma over their working choices – being criticised for both working and not. As a result of this they tend to suffer increasing guilt over the split priorities of home/work life, and this will have been exacerbated during lockdown. Gillian believes the best thing to do is to re-group and decide what lessons they want to take from this and what it means for their career.

We are, now more than ever living in a very PC world and within the office environment women are no longer asked whether children feature in their future and how they can still develop their career around this. Women very rarely have their full career planned often holding back from trying to be promoted due to marriage/family plans. Both Gillian and Joanne feel that we should be encouraging people to bring their whole selves to work  – but if women are not able to talk about future family plans, or issues they face then this will never be the case.

Stress! We don’t need to suffer and be victims to our emotions
How to Simplify Inclusion by Focusing on Behaviours